In this episode of The Art Hunter TV, David Hunt talks to contemporary artist Mysterious Al who developed one of his styles from ancient tribal masks.

In this episode of The Art Hunter, David Hunt talks to William Griffith who is a world renowned jeweller whose unique work mirrors some of the world’s historical landmarks.

Peter Kalos the founder and the sole teacher at THE LAB has studied with some of the world's most prolific acting teachers. At age 19 he moved to the USA and commenced his acting journey with master teacher Stella Adler for four years, following which he went on to study full time at the Lee Strasberg Theatre Institute under the tutelage of Anna Strasberg for over ten years.

Welcome to the Alex sessions

The interviews are Filmed weekly at the Alex theatre, Fitzroy St, St Kilda and you’ll be...

Check out the incredible architecture of the centre, this is the stairwell looking up to the... 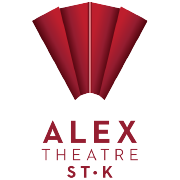 Sunday Arts Magazine
An "arty farty" show about the thriving arts scene in Melbourne and beyond. The program covers all styles of art, including film, performance and visual arts.
Listen On Apple Podcasts Listen On Google Podcasts
The Amazing Cannonball Flower
by JOY 94.9 - LGBTI, LGBTIQA+, LGBTQIA+, LGBT, LGBTQ, LGB, Gay, Lesbian, Trans, Intersex, Queer Podcasts for all our Rainbow Communities

The Amazing Cannonball Flower are 3 comedians performing a mix of sketch, theatre and stand-up with

a lot of comedy and a lot of heart. Aarti Vincent – The Delhi Theatre Addict; Kru Harale – The Mumbai Drama Queen; James G Warren – The Hobart Golden Boy, come together in the melting pot of Melbourne to perform surreal, satirical and heart-warming skits.

We believe anyone can be anything. We dare to be amazing! Aarti Vincent is our visionary impetus,

Kru Harale is our vibrant innovator, and James G Warren is along for diversity. Come find out what

two Indian girls and a white guy bring to the world of drama.

Bouncing between standup, sketch and theatre, we’ll be performing the following skits:

‘The Art Of Seduction’ is an adaptation of a very heart-warming Russian play by Anton Chekov.

In the original play set in the 19th century AD, the seducer was a good old fashioned male; in this 21st

century adaptation our seducer is played by a female. Will she allure you, entice you or win your heart?

‘The Upside Down World’ is a satirical comedic take addressing the hot topics of diversity and sexism.

A world where women rule and white is no longer a privileged race. Will this straight white male tick the diversity box? Will he stand up for his ‘masculinist values’ and say no to sexual harassment?

Aarti Vincent, blissfully ignorant about her ‘person of colour’ identity, auditioned for a white British

character within weeks of arriving in Australia. She truly believes that ‘talent outshines ethnicity’.

“Aarti, carried off her role with such wonderfully involved look that she shone” – Indian Express

her perspective about Indians, Australia, Sex and more.

“A comedy legend in the making” – Laugh Masters Academy

for the love of it. A Connoisseur of comedy, good friends and broccoli. 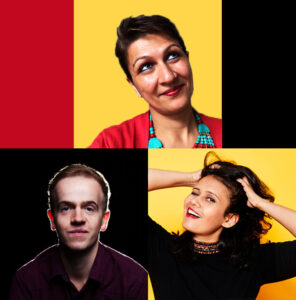