In this episode of The Art Hunter TV,  David Hunt talks to contemporary artist Mysterious Al who developed one of his styles from ancient tribal masks.

Mysterious Al is a contemporary artist renowned for putting on art exhibitions in unusual locations; including derelict warehouses, old factories, disused shop-fronts and more recently; a fairground ghost train.   Al rose to fame in the early 2000s through the explosion of street art, developing a notoriety for his wall paintings, paste-ups and street installations alongside his contemporaries D*face, Banksy and PMH.

Al’s work has changed dramatically from his early beginnings. His painted ‘portraits’ are influenced by ancient tribal masks, reimagined in wild contemporary colours. His work is striking and at first glance humorous; but look closer and you’ll see something more vulnerable or melancholy. There’s always something behind a smile.   “Although there’s a lot of spontaneity and energy in my work, I draw reference from a rich history of method and colour. I like the practice of taking shapes and marks that are created spontaneously and wrangling them into line. Making order out of chaos”.

The Art Hunter TV David Hunt explores the artist with an in-depth look into their background; where they came from, the type and work they do, their latest work and where they see the future.

The Art Hunter TV is now Showing on Channel 31

Town Hall Gallery presents the new exhibition Above the Canopy, celebrating the rich and diverse beauty of the Australian natural environment from 9 July to 24 September. This exhibition conveys the unimaginable grandeur of nature while exploring concerns for climate action and the need to protect the planet for future generations.

Featuring artists working with installation, photography, painting, animation and textiles, the exhibition creates a theatrical, immersive, and regenerative experience that acknowledges the significance of Country and our need to care for it. The artists include Sarah Hendy, Janet Laurence, Michael McHugh, Rebecca Mayo, Catherine Nelson, Grant Stevens and Judy Watson.

Nature has provided an infinite source of inspiration for visual artists  across millennia; they have captured its beauty, documented the impacts of changing weather patterns, and commented on unsustainable human practices. Through hyperreal images of lush and verdant forests alongside detailed studies of insects, botany, birds and geology, Above the Canopy  shows a deep appreciation for our majestic and awe-inspiring world.

Sarah Hendy is a multidisciplinary artist based in Victoria. Her featured work, ‘Waiting For Daybreak’ (2018) (pictured left), interrogates a near-death experience she had in one of the most beautiful parts of Australia after nearly drowning in the Northern Rivers region of NSW as a result of ex-tropical Cyclone Debbie. It is characterised by verdant and luxurious plant growth, with delicate ferns growing within a crowded landscape of giant stinging trees, figs, booyongs and flame trees.

Janet Laurence’s practice examines our physical, cultural and conflicting relationship to the natural world through site-specific gallery and museum works. Laurence creates immersive environments that navigate the interconnections between life and the world. Her installation ‘Breath of the Forest’ (2020) features eleven suspended silk veils overlayed with images of animals and trees, including old growth forests in Tasmania. This work embodies the transience and fragility of natural habitats.

Michael McHugh collects a wide range of photographs and drawings during research trips to museums, libraries and gardens around the world. In his studio, he draws and creates a series of collages which lead to large format paintings. For Above the Canopy, he has created a large-scale painting Swimming in the Clouds (2022)which asks what new hybrid organic forms will evolve from climate change, when plant forms are washed away and land is engulfed by saltwater intrusion that includes complex sea life microcosms.

Michael McHugh says: “My work imagines a world of natural forms from both land and sea, completely with new DNA, creating a rare evolution of species which organically began from the beauty of the Australian natural environment. This work, Swimming In The Clouds (Acrylic on Canvas) is the largest painting I have done to date, stretching six metres long, and celebrates colour and nature with lush paint and obsessive mark marking. In my world I want to bring the viewer joy, and for a moment forget everything else that is going on in their lives.”

Rebecca Mayo is a lecturer at the School of Art & Design, Australian National University and principally examines relations and interactions between urban ecologically significant sites and people. Referencing Charles Darwin’s 1881 book The Formation of Vegetable Mould through the Action of Worms and contemplating the agency of non-human life, Mayo’s featured work At work with worms (2020) is a compost/composite of Darwin’s laser-etched text, her human tending, and the worms’ business of eating. Mayo explains, “Working with the thousands of worms contained in the farm, my making slowed to their rhythm. Etched in Canberra and left for a week with the worms, the book pages took up the worms’ appetite which in turn paced with the climate inside their home.”

Catherine Nelson uses digital technology as her paintbrush to create lush, hyperreal landscape ‘paintings’ and animations. After completing her art education in painting at the College of Fine Arts in Sydney, Catherine created visual effects for films such as Moulin Rouge, Harry Potter, 300 and Australia. Nature is the primary inspiration for her art; she uses collage techniques in the computer to shift photos from ‘reality’ into imagined worlds of her devising.

Grant Stevens’ practice explores the various ways that digital technologies and conventions of representation mediate our inner worlds and social realities. Drawing on the visual languages of video games and the wellness industry, his featured work, The Forest (2020) is an endless panoramic experience of an immersive, idealised computer-generated forest with sound. Created with procedurally generated computer graphics homogenised through algorithms, it is simultaneously an homage to the natural environment and a satire of wellbeing initiatives and their claims to rejuvenation.

Judy Watson’s Aboriginal matrilineal family is from Waanyi country in north-west Queensland. Spanning painting, printmaking, drawing, sculpture and video, her practice often draws on archival documents and materials, such as maps, letters, and police reports, to unveil institutionalised discrimination against Aboriginal people. Watson’s two paintings on display incorporate systems for measuring Australia’s median temperature and fire danger, the latter a familiar sight on regional road networks. She contrasts an ember red-orange work with the stark silhouette of a denuded tree depicted at its centre with a more hopeful, vibrant green work referencing regrowth on K’gari (Fraser Island) after the devastating 2020 bushfires.

Above the Canopy brings together artists from diverse walks of life, whose works emphasise the grandeur of nature while also raise concerns for climate action and the need to preserve it for future generations. 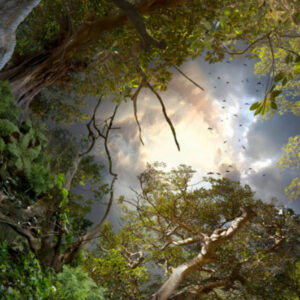 The post Above the Canopy appeared first on Sunday Arts Magazine.