In this Episode of The Art Hunter David Hunt gets a real insight with aboriginal artist Ande Kempnich and his work as an artist.

Ande Kempnich was born in 1970 on the North Coast of New South Wales. His mother, Isobel Terare raised a large family, and Ande, being the second youngest, gained knowledge of traditional culture (especially language) from older siblings and other relatives.

His art started at the age of seven with the use of basic traditional symbols on boomerangs, woomeras and canvas. He painted recreationally for the next few years. At seventeen, Ande stopped painting to concentrate on studies and gained his HSC in 1988. He then went on to study for a Bachelor of Education at Charles Sturt University, Bathurst but decided that art would be his career.

In 1991, Ande gained the position as artist in residence at Nunumbal Aboriginal Arts and Crafts, headed by Jarwin Jagamarra. This furthered his education by learning differences in style between central desert art and arts from the eastern seaboard. While he has great respect and appreciation for the arts from the central desert, he is only permitted to paint images from his own land, Bundjalung Country.

His paintings depict the traditional ways of life, the land, the natural resources, ceremonies, stories and legends, and contemporary works which are largely influenced by his Aboriginal heritage.

Ande currently lives in Sydney and has had works exhibited with Arone Raymond Meeks and Jeffrey Samuals, Indigenous Art of the Dreamtime, United Nations New York and Jinta Desert Art Gallery, Sydney. He recently spent a year touring through Europe, promoting and gaining more recognition for his art and culture.

In the Art Hunter, David Hunt explores the artist with an in-depth look into their background; where they came from, the type and work they do, their latest work and where they see the future. 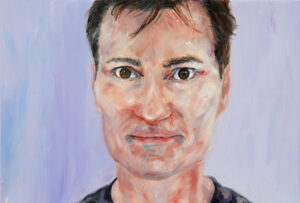